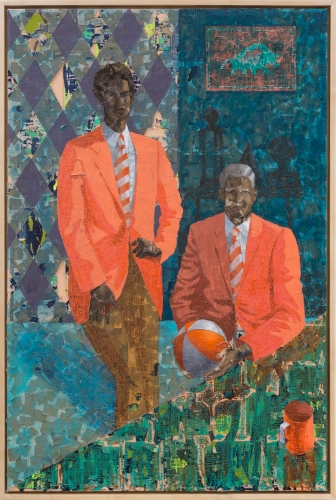 Night Gallery is pleased to announce the acquisition of Derek Fordjour’s “Signing Day,” 2019, by the Nasher Museum of Art. The work was generously donated to the museum by the late Blake Byrne, having first appeared in Fordjour’s solo exhibition JRRNNYS, which was presented at Night Gallery in February 2019.

Derek Fordjour's paintings depict tableaus of games, invoking the internal logic of competitive contests to provoke a consideration of power structures both hidden and explicit. The works can be interpreted on allegorical and systemic levels simultaneously, inviting the viewer to draw parallels to everyday experience while also prompting consideration to material and economic structures. Implicitly comparing the culture and codes of athletics to the arts industry, the works raise questions of valuation, agency, and exceptionalism. "Signing Day" questions the place of the individual, both on a team and within a larger commercial enterprise. The richly ambiguous work conjures an experience of heartfelt triumph at the same time that it gestures to the merciless systems that regulate and determine even the most alluring of opportunities.


Derek Fordjour (b. 1974, Memphis, TN) is a graduate of Morehouse College in Atlanta, Georgia, earned a Master’s Degree in Art Education from Harvard University, and holds an MFA in painting at Hunter College. His work has been exhibited in numerous venues including The Whitney Museum, New York; Sugarhill Museum, Harlem; and BAM, Brooklyn. In September 2018, the Whitney Museum in partnership with TF Cornerstone and The High Line debuted a public billboard installation by the artist as part of its Whitney Billboard Project. Also in 2018, Fordjour was commissioned by the New York City MTA to create a series of permanent mosaic installations for 145th Street Station. Fordjour’s other awards include the 2018 Deustche Bank NYFA Fellow Award, the 2017 Sharpe-Walentas Studio Program in New York City, and the 2016 Sugarhill Museum Artist-in-Residence. His work has been reviewed in The New York Times, The Los Angeles Times, Hyperallergic, and ARTnews, among other publications. He was appointed Critic at Yale University University School of Art in 2018. His work also appears in several collections throughout the US and Europe including The Whitney Museum, the Brooklyn Museum, the Studio Museum in Harlem, the Dallas Museum of Art, and the Pérez Art Museum Miami. He lives and works in New York.