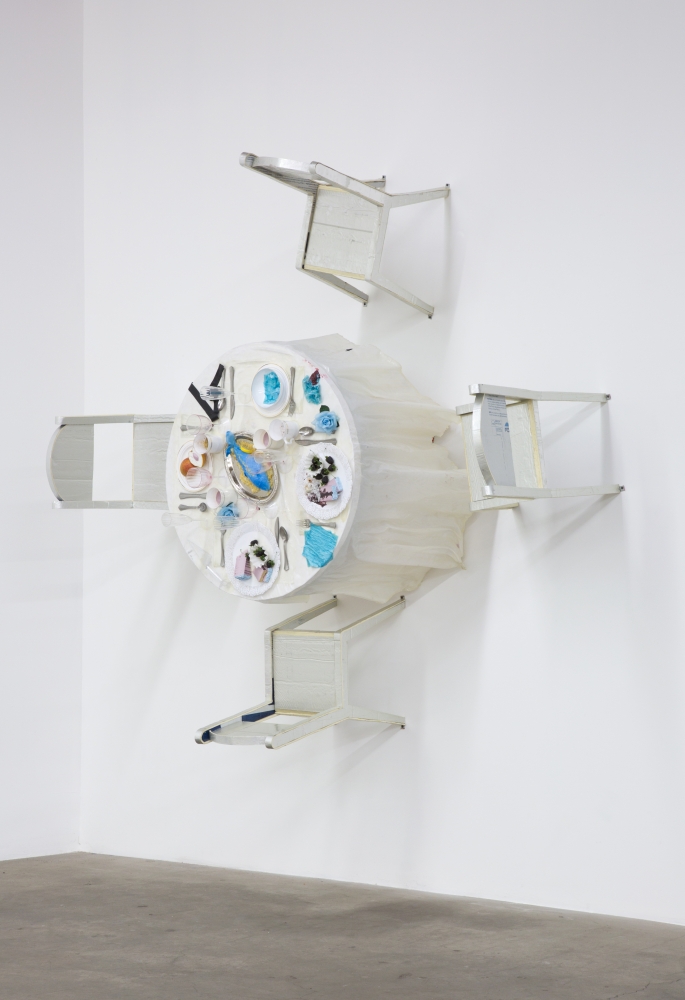 A sculpture by Samara Golden, entitled “Missing Pieces from a Fall of Corners #2,” 2014, has entered the permanent collection of the Hammer Museum. The work was the donation of Lynn and Craig Jacobson. Golden is known for sculptures and installations that create surreal, richly psychological experiences that warp the viewer’s perception of space. Installed on walls and ceilings, her sculptures recreate social settings from impossible vantage points, seemingly defying gravity through plays of scale and use of sculptural trompe l’oeil. The sculpture acquired by the Hammer Museum is related to the body of work that appeared in A Fall of Corners, Golden’s immersive exhibition at CANADA Gallery. Close inspection of the work reveals Golden’s virtuosic plays of material, as insulation foam, resin, and plastic are transformed into a decadent feast suspended on its side. Golden’s work is also included in the collections of the Whitney Museum, New York, NY; LACMA, Los Angeles, CA; MOCA, Los Angeles, CA; The Zabludowicz Collection, London; and the Yuz Museum, Shanghai.

Samara Golden (b. 1973, Ann Arbor, Michigan) has had solo exhibitions at MoMA PS1, New York; Yerba Buena Center for the Arts, San Francisco; Night Gallery, Los Angeles; and CANADA, New York. Her monumental installation "The Meat Grinder's Iron Clothes” was featured in the 2017 Whitney Biennial. In 2019, she presented new work in the group exhibition "Psyche & Politics" at Staatliche Kunsthalle Baden-Baden. She has also been included in group exhibitions at Tanya Bonakdar Gallery, New York; Nicelle Beauchene, New York; the Yuz Museum, Shanghai; and was featured in the 2014 Hammer Biennial, Los Angeles and "Room to Live" at MOCA Los Angeles. In 2015 a monograph on Golden was published by MoMA PS1, and her work has been written about in ArtForum, Art in America, The New York Times, The New Yorker, and Mousse among other publications. Golden’s work is in the permanent collection of The Whitney Museum, New York; LACMA, and MOCA in Los Angeles; The Zabludowicz Collection, London; and Yuz Museum, Shanghai. She lives and works in Los Angeles.