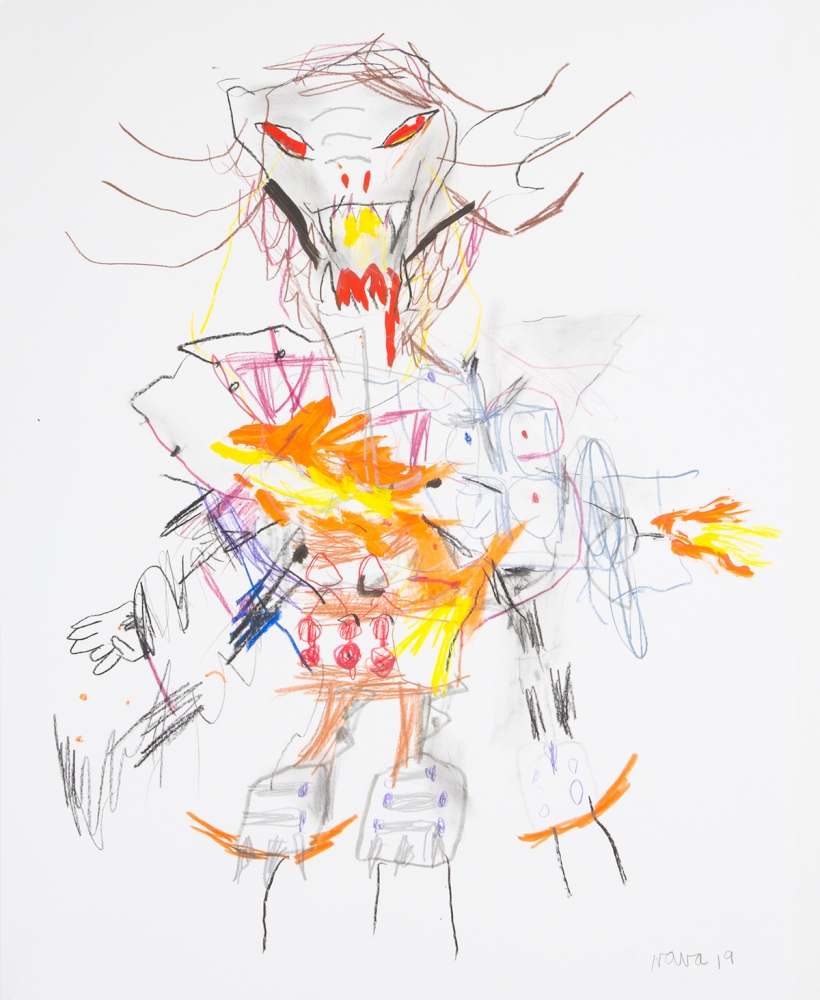 Night Gallery is pleased to announce the Art Institute of Chicago's acquisition of four works on paper by Robert Nava. The drawings – in crayon, grease pencil, and pencil – will be included in the museum's Prints and Drawings Collection.

Nava is known for works that depict fantastical creatures in feverishly expressive lines, which he equates to the most primal forms of markmaking, spontaneous and unconscious. Drawing is a cornerstone of the artist's practice, establishing the spare, masterful maneuvers by which he conjures highly evocative figures. Indeed, prolonged looking reveals the virtuosity and rigorous labor behind Nava’s deceptively simple forms.

The mythical subject matter of Nava’s works similarly reflects the artist’s concern with the primordial and instinctive. Some of these creatures have appeared throughout Western art history – griffins, dragons, witches – while others, such as angels and demons, have a religious significance, speaking to the timeless symbolic power of these otherworldly figures. Still others are hybrid creatures of the artist’s own invention: tigers combined with sharks, robots merged with bats, wolves fused with airplanes. All categories refer to Jungian archetypes, the artist explains: the traditional creatures have been reiterated across millennia, revealing their continued psychological relevance, while the invented characters emerge out of an instinctive process of combination, indicating the reflexive powers of the imagination. The expressionistic quality of Nava’s painting similarly speaks to the psychoanalytic underpinnings of his project, bringing latent symbolism to the surface as a form of psychological release.


Robert Nava (b. East Chicago, IN) received his M.F.A. from Yale, New Haven, CT; and his B.A. from Indiana University Northwest, Gary, IN. He has had solo exhibitions at Night Gallery, Los Angeles; V1 Gallery, Copenhagen, Denmark; Sorry We’re Closed Gallery, Brussels, Belgium. His work has been included in group exhibitions at Jeffrey Deitch, Los Angeles, CA; Wayne State University, Detroit, MI; and Safe Gallery, Brooklyn, NY, among other. He was the recent subject of a profile in GQ, and in 2018 was awarded a residency at the Macedonia Institute in New York state. Nava lives and works in Brooklyn, NY.